Create an Account - Increase your productivity, customize your experience, and engage in information you care about.

Tom received his Bachelor’s Degree in Business Administration from the University of Kansas in 1988, and his Law Degree from the University of Kansas School of Law in 1990.  He was an Assistant Saline County Attorney from 1991 to 1995 and served as First Assistant Saline County Attorney from 1995 to 2001.  Tom served as Deputy Reno County District Attorney from 2001 through May 2020, and was appointed District Attorney of Reno County, Kansas, beginning June 1, 2020. He was previously cross designated as a Special Assistant United States Attorney. Tom was a founding member of the Reno County Drug Court and acted as the Drug Court Prosecutor from its first session in March of 2013 until May of 2020. 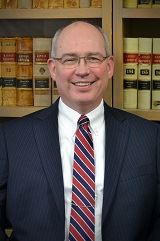 About the District Attorney’s Office

Formerly the county attorney, the office was established as that of the district attorney by a legislative act in 1999. The district attorney’s office prosecutes criminal and selected civil matters referred from five police departments, the Reno County Sheriff’s office, the Kansas Highway Patrol, and the Kansas Bureau of Investigation. 1,517 law enforcement reports were logged into the office in 2002. 182 additional misdemeanor worthless check complaints were logged into the office by private citizens in 2002.

The office services approximately 65,000 citizens spread throughout 15 communities in an area of 1,365 square miles.

In 2002, the office filed 1,291 adult criminal cases, 418 juvenile offender cases, 253 Child in Need of Care petitions, 34 drug asset forfeiture cases, and 127 Care and Treatment cases. Additionally, the office handled 225 juvenile diversion cases, 44 appellate briefs, and was responsible for 6,143 traffic cases filed in the district court. The 27th Judicial District was ranked as the second busiest in Kansas based on caseload per judge in 2002.